The First "Town School"
​in Howard

The first country school in Miner County was a sod shanty located on the farm of G. L. Fjellestad, in the northeast corner of the county. The first term was held in the summer of 1882, with Mrs. Sarah Braford as the teacher.  She had only two regular students: Carl J. Holvik and A. A. Henden Jr. although two others attended periodically. Mrs. Braford’s infant daughter, Nellie, sat in a highchair in the corner while her mother taught her students.  In the fall, the threshers needed additional grain storage, so they boarded off half of the sod shanty and began filling it with wheat while school continued in the other half of the building. Those first few years, 49 school districts were formed and 9 school buildings were scattered around the county.  By 1890, the county had 70 schoolhouses and 75 teachers.  Teachers earned an average of $26 a month and taught six months a year.

Meanwhile, the first public “town” school was organized in Fall 1881 and classes were held in the A. B. Allen grocery store.  Mrs. Mary G. Morrill, from Boston and a claim holder near Artesian, was the first teacher.  The following year, the school board selected a spot one block west of Main Street between Minnie Street and College Avenue (at the present location of the Howard Elementary School) for the first formal school.  The new school building was situated on three acres of land donated by J. D. Farmer and cost $1,800 to construct. The building, a 24- x 38-foot, 2-story building was roomy enough to accommodate Grades 1-8, with a first-floor hall for the younger students and a second-floor hall for the older students. The school included a coal burning stove, benches for students, a bookcase and cupboards in all the rooms.  Initially, students used slates for their lessons but eventually blackboards were added.  The school opened in early June 1882.  County taxes paid for its operation, including the salary for Mrs. Morrill plus the salary for an additional, male teacher for the older students. (Howard Farmer, May 6, 1882).

The town school ended its first term in early March 1883. On the last day of the year, students hosted a “public day” with the proceeds earmarked for the purchase of a bell for the tower of the school building (Howard Farmer, March 3, 1883).  By September 1883, funds had been raised and the Howard Farmer announced that the school bell had been ordered and would arrive in a few days.
School enrollments grew quickly, with many of the area immigrants enrolled to gain a basic understanding of English.  In August 1883, the school census indicated 868 students were attending the county’s schools.  In 1883, the town school had 79 students enrolled; in 1884, 113 students were enrolled.  By 1895, 176 students were enrolled in town – many more students than the current school could accommodate.

In 1894, building plans were drawn up for a new town school.  J. H. Albright, an architect from Huron, was awarded the building contract.  The Howard Press noted that the walls would be built of Leeds brick with a face of Dresbach brick. Stone for the foundation of the building was bought by weight and the Howard Press congratulated the board of education on their shrewd building decisions.
While the new building was under construction, Professor Chas. E. Holmes of Canova was hired to take charge of the new Howard town school and to teach at the upper level, Grades 9-11. Professor Holmes was a graduate of Yale University, class of 1884, and was considered “an excellent hire”. His first contribution to the community was a series of Friday night lectures that would continue through the winter. The first lecture was on “The Origin of Written Language” to be followed by a series on English literature. The next series will focus on natural science.  (Howard Press).  The newspaper also noted that Professor Holmes would be assisted by Misses Ellen McKeon and Nellie Harvey, who taught the intermediate and primary grades, respectively.

But, by June 1895, the board of education was not happy with progress on the school project and decided to take charge of the construction.  The Howard Democrat (July 6, 1895) announced that Dan Lower and “a force of able men” were put in charge and that “the new school would be finished soon without any more trouble with contractors.”  In the same issue, the newspaper also noted that John Arneson brought a large telescope back from Minneapolis and he and friends could be seen in the belfry of the new school, taking in the sights of the surrounding countryside.

On July 13, 1895, the Howard Democrat announced that the editor had been given a tour of the school building. In the editor’s opinion, “Howard will have a fine school this year.  But, the question is, ‘What do we do with the old building?’ ”
On August 3, 1895, the Howard Democrat announced that Mayor Girton had offered the school board $400 for the old building, with the school board responsible for moving it to a new location.  Willis H. Clark, of St. Mary’s, got the contract to relocate the old school building to lots just north of the Mumford law offices, where it remained until the 1980s. The lower level of the building was converted into a City Hall and later a fire station; the upper level was used as a community hall.  Joseph. N. Allen purchased the “L” portion of the building and moved it to a lot south of the railroad tracks, where it was remodeled into a boarding house.

Before the old school building was moved, Professor Holmes and Lew Perry took the bell down and placed it in the belfry of the new building.  Professor Holmes also collected nearly 300 volumes for the new school library. The members of the school board and the faculty held an informal reception at the new school building on August 31, 1895, just before school started in early September 1895 (Howard Democrat, September 7, 1895).

Another brick addition was added to the school in 1920 and the school was also remodeled and modernized with the addition of electric lights and indoor plumbing. Sometime during those renovations, the belfry was removed and the bell put in storage.  That large brick building (comprised of the original 1895 school plus the 1911 and 1920 additions) served the Howard community for many years, until a new elementary school was built in 1954 and a new high school was built in 1970. 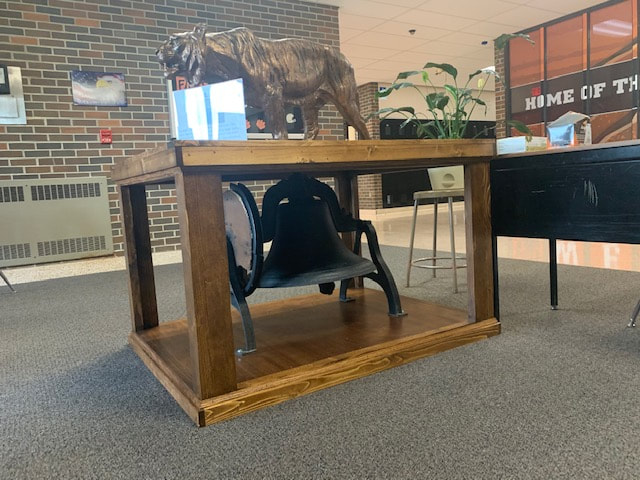 The 1895 bell, currently on display in the high school hallway.
​